In any journey there comes that most memorable moment. For me, it is hearing the words of an old Ugogo tribesman, translated for me by my mother. He is standing beside us, bare feet planted on the red earth of inland Tanzania. Behind him grows a dusty thorn tree and a bougainvillea bush with such bright red flowers it almost hurts to look at them. The country around us is flat, with boulders piled up into hills.

“You were born here,” he says, pointing at the ground. It is true – we are standing only a short distance from the place where I was born. “You are Ugogo.” A look of deep puzzlement crosses his face. “Why are you not living here?”

For a moment, I am utterly seduced by his question. I imagine myself and my family making a new life here. Then the fantasy passes. My roots, I know, are firmly planted in Australia, where my husband and children were born. I am here in my own homeland for only five weeks.

My parents, now in their late 70s, are making their farewell journey to Tanzania, the country where they lived intermittently for more than 30 years, and my brother and I are joining them. We haven’t been in Tanzania since we were children. We share fond memories of safaris to remote areas, where Dad operated a medical clinic from the back of his Land Rover. While he worked, Mum would sit at her easel painting and the four children were free to run wild.

For me, there is an added interest in returning. Two of my novels are set in Tanzania, around the time of independence in 1964. I want to see how the Tanzania of my imagination compares with the reality of the country today.

We celebrate my birthday in Dar es Salaam, on the country’s lush east coast, then set off by bus to the area where we used to live. Will the dry plains of the interior feel like home, I wonder? I want them to.

It takes a day to reach Dodoma, the small-city capital. And yes, the landscape begins to feel deeply – warmly – familiar. This part of the trip is loaded with emotionally potent moments, like watching my parents meet old friends who had never expected to see them again and seeing my father standing by the grave of his oldest friend. Like visiting the homes of the women who Mum had taught to make batik cloth and seeing their faded artwork still displayed proudly on bare earthen walls or standing in the room where my brother and I were born, now a dusty mines department office. The porcelain sinks where we had our first baths are still in the corner.

In our home village, Mvumi, about 42 kilometres south-east of Dodoma, we’re led along dusty paths between houses to the sound of drumming and singing. We are guests of honour at two feasts a day. These occasions have changed since my parents’ last visit 16 years ago – instead of a shared bowl of ugali (cornmeal porridge) and mboga (stewed vegetables with a few bits of meat), there are pots of chicken stew (the birds are tough but extraordinarily tasty), plates of wild spinach boiled with peanuts, delicious cooked green bananas and even Indian dishes like biryani and lamb curry. 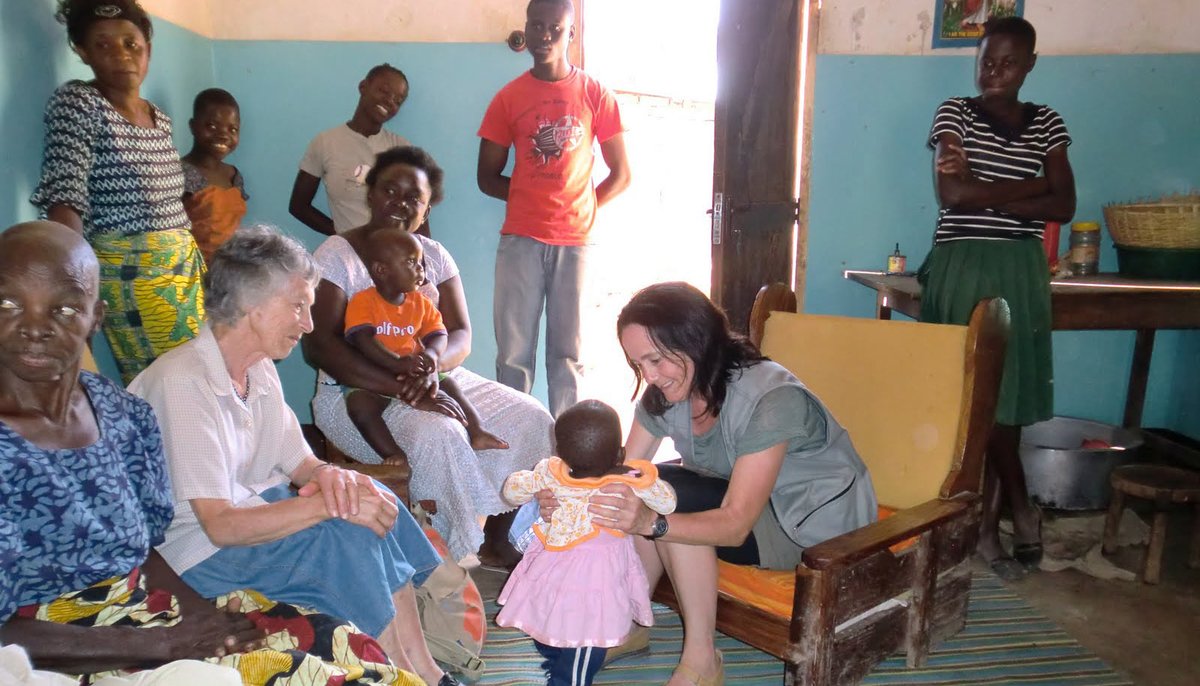 Only about half of Mvumi has electricity. One of the most memorable feasts is served by the light of a kerosene lantern. The smell and the soft shadows thrown across the table carry me back to my childhood. During the meal the village carver arrives and we buy his wooden animals. He is the son of the man who made the ones we’d played with as children.

Though my parents speak fluent Swahili, my brother and I remember only fragments. Our fumbled attempts at the language are greeted with great warmth. When I tell a street hawker I only speak a little Swahili, he smiles encouragingly and replies in English: “Practice makes perfect.” In Tanzania, secondary school is taught in English, so it’s spoken widely. But I’d suggest travellers learn at least a few phrases of Swahili, including some proper greetings (and I don’t mean just the slangy “jambo”).

The hub of the Northern Tanzanian safari business is Arusha and after sad farewells we fly here for a seven-day safari through five game parks. We’d been on camping trips in most of the parks before; as children we referred to them by incident as well as name. Serengeti was the place where a rhino glared through the window of our tent, red-eyed in the frail light of our torch. Murchison Falls was where a monkey stole a toffee from the car and got its teeth stuck together. Ngorongoro Crater was where my older sister nearly died from a fever.

This time our safari will be very different. We’ll be tourists, staying not in our own basic campsites but in permanent tented camps and park lodges. Our driver-guide is Goodluck. He speaks excellent English, can fix his four-wheel-drive and is tirelessly good-natured. He has an encyclopedic knowledge of native plants, birds and animals. (Did you know secretary birds can survive snake-bite? Or that a patch of sunburn can be fatal for a hippo?)

Goodluck can drive over corrugated dirt roads and dodge potholes yet still spot a rare bird in a tree or an animal hidden in long grass. He’ll stop the vehicle and say quietly: “Can you see over by that rock? It’s a . . . [leopard, hyena, whatever].”

The sociology of the game park is fascinating. The driver-guides employed by upmarket safari companies, who have large fleets with radio communication between vehicles, form their own tight clubs. The budget operators – like ours – support one another and help out with breakdowns and meet to share lunches.

They also pass on coded information about animal sightings. The idea is that your driver will then appear to find them by chance. This leads to crowd scenes, and we ask Goodluck not to bother with this charade.

By sticking to the quieter areas we have some memorable encounters – like watching a pair of zebras rubbing their ears at their regular scratching rock. Or seeing a baboon cradling a dead infant that looks just like a floppy doll. Goodluck says it won’t be abandoned until the father is certain it won’t “wake up”. And I’m interested in spying the small animals – the mongoose or the tiny shy deer called a dik-dik. 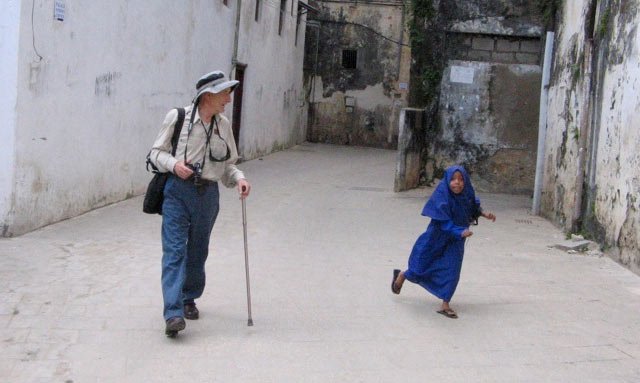 I fall in love with the tented camps. In the late afternoon I find myself frowning at elephants and lions, impatient to get to our camp and discover how each owner has created a special sense of place. Every camp has a different atmosphere, the result of the design and arrangement of the tents (erected on platforms with decks on the front and each with ensuite), the gardens, the placement of outdoor fireplaces and the ambience of the central dining room and bar.

Though there is electricity in all the camps, the tents are usually placed at a discreet distance from the central hut so guards are provided to guide you to your tent after dark. At one camp I’m told a Masai warrior will accompany me. He’ll protect me from lions. It turns out he’s armed with a torch and wears a workshirt and trousers rather than a shuka. I suspect the lions are a myth. But there are definitely hyenas.

Zipped safely in my tent and strangely tired after a day of sitting in a vehicle, I fall asleep to the humming of insects and the calls of owls and bushbabies. And I wake to birdsong and the tinkle of cowbells.

In each of the camps a three- or four-course set menu is served in the dining hut – always delicious. At Manyara Tented Camp, we’re offered roast lamb. At the first mouthful we know it’s too flavoursome to be lamb and the waiter agrees it’s mbuzi – goat. It is superb. Good South African wines are served (there is a Tanzanian wine, described by a local as being “only good for church”), though we usually choose from one of the local beers. I would have loved them just for their names: Safari, Kilimanjaro, Serengeti, Tusker.

The least luxurious of the camps makes the strongest impression on me. Lake Natron Tented Camp is an oasis, complete with a small swimming pool, set on an arid plain of dark volcanic dust not far from the active volcano that Masai call “Mountain of God”. I sit at the edge of the camp at dusk on a chair made of cowhide, looking over a flat landscape towards distant hills. The view is uninspiring compared with many in this extraordinary country but I feel an overwhelming sense of peace.

Images of the day flow back to me. Masai boys kicking a battered ball on a field of black sand. A perilous visit to a waterfall, ploughing upstream against a torrent in borrowed truck-tyre sandals. And reaching the place where two waterfalls converge: one is cold, fresh water; the other flows hot and salty from the Mountain of God.

I recall the sight of pink desert roses blooming on a bush with no leaves. Flamingos on the black shores of the salt lake. If I could choose one place in Tanzania to return to, it would be here.

As well as the tented camps, we stay in several wildlife lodges. All have big windows, lofty dining rooms where vast buffets are served and facilities for lots of guests. These things don’t attract me, though they do seem impressive so far out in the bush.

One of the lodges manages to combine these big-scale elements with something truly special. The appeal of Seronera Wildlife Lodge, in Serengeti National Park, has much to do with its construction around an outcrop of boulders; to get from one part of the lodge to another, you walk through gaps between boulders. Some of the surfaces have been decorated with superbly executed prehistoric-style paintings. Combined with polished timber and Persian rugs, the effect is striking. There is a pool here, nestled among the boulders – surely one of the most beautiful places in the world to enjoy a sundowner. You can watch large blue and purple lizards soaking up the heat of the stones or laugh at the antics of the semi-tame hyraxes, like oversized hamsters.

Mum and dad can’t help marvelling at the high standards of hospitality. They remember the hardline socialist regime set up by the first president of the country, Julius Nyrere: an era of badly run state-owned businesses and truculent government officials. Not surprisingly, tourists shunned the nation for decades. But more recent government policies have allowed private enterprise to flourish and everyone we meet is incredibly friendly and helpful. It’s a great time to visit Tanzania. It’s a little-known fact that the country has been politically stable ever since independence. The whole place exudes national pride and optimism about the future. And tourists have not yet worn out their welcome. 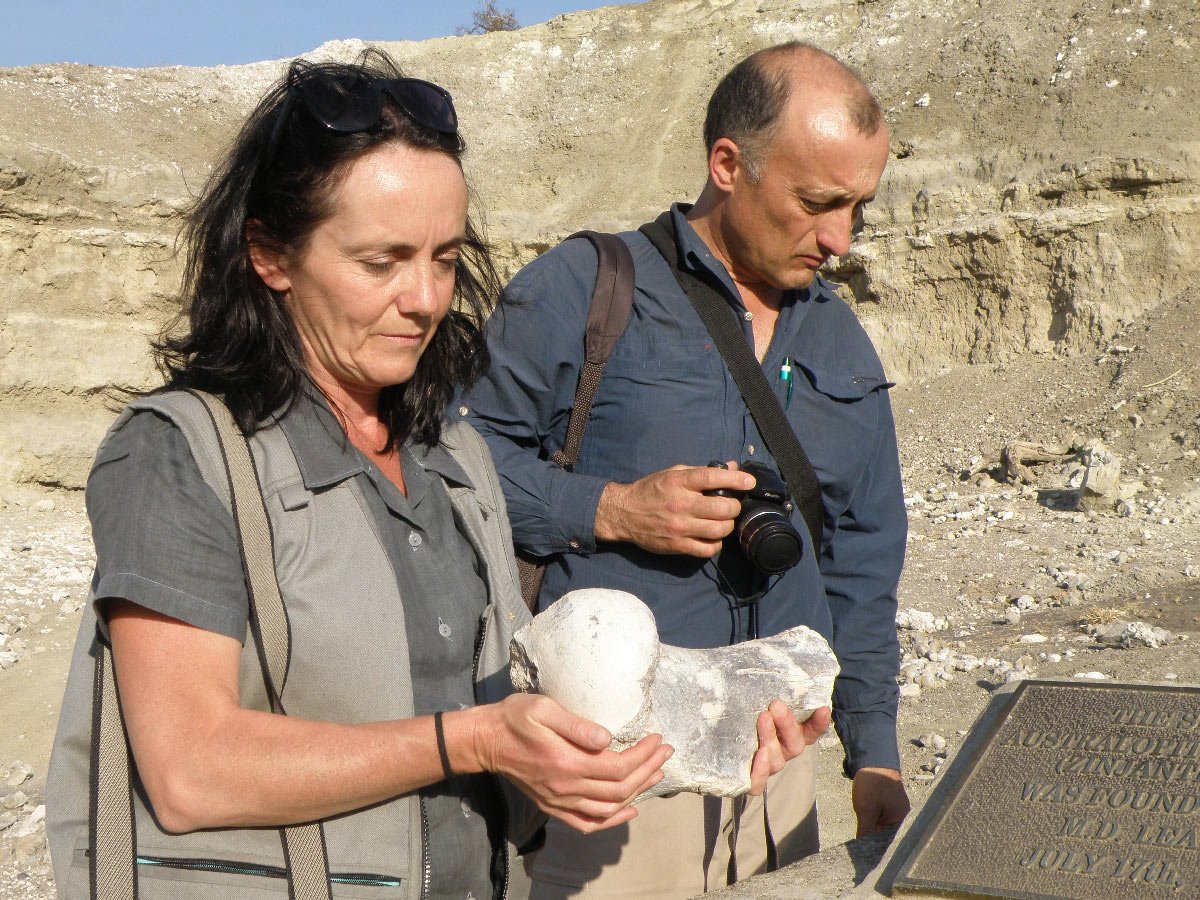 We find it hard to leave Tanzania. Though mum and dad will probably never return, my brother and I hope to go again with our families, but it’s not likely to be soon. And anyway, this journey into our past can never be repeated.

The journey has been so fulfilling, so perfect, that it’s like leaving a restaurant after a meal that could not have been bettered. How could I ask for more?

And yet... A voice still whispers in my head “karibu tena”. Welcome back. 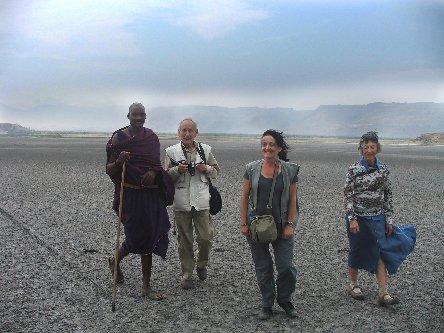